We for you. The Team

Hosts out of passion - for generations.

Warm hospitality and personal care are our priority. We are not a country hotel, but a place that wants to give away unforgettable childhood memories with the most beautiful smile - that of your children. A friendly and caring team with a passion for giving you a relaxing family time at Averbeck is looking forward to your visit. 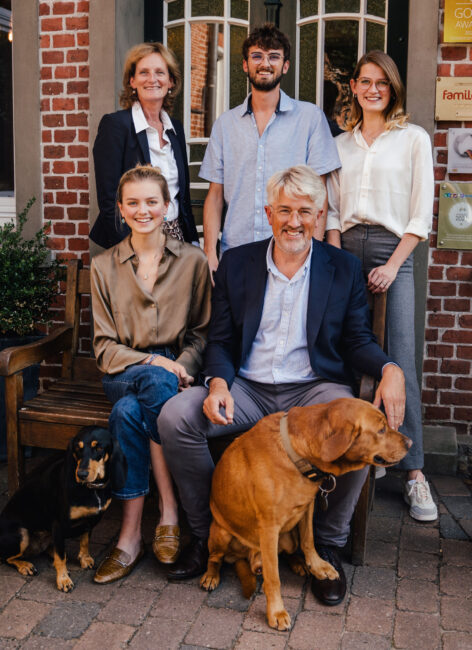 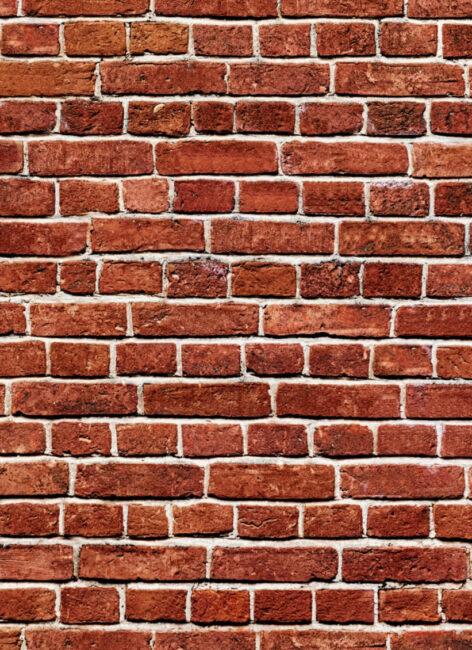 Your host, the Averbeck-Pennington family

We are a converted farm specialising in family holidays. With us you will experience beautiful days with the advantages of a hotel, but the charm of a farm with history and above all: Individuality.

We take pleasure in helping you - whether young or old - to experience your personal dream holiday in a personal, friendly atmosphere. We stand for simplicity, flexibility, unobtrusive, high-quality programmes and care, fresh, varied cuisine, warm, open service and, of course, a beautiful, fresh, clean ambience. 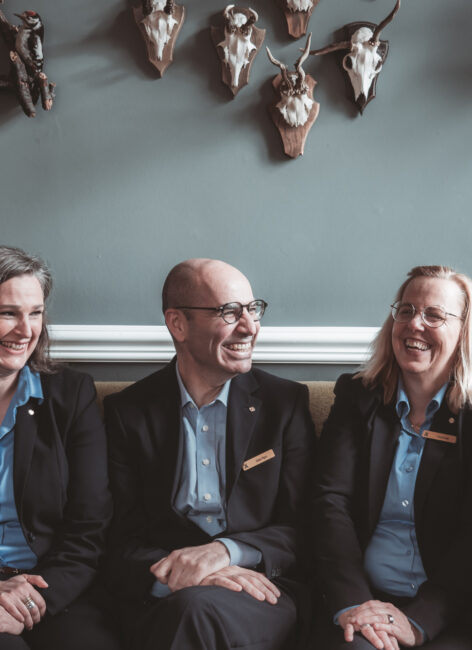 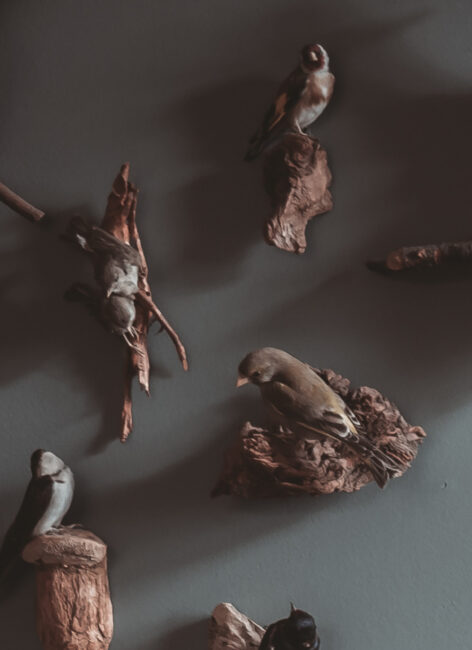 We will make you offers, confirm bookings, welcome you and show you around the house and farm on your arrival. Our reception team, consisting of Frauke, Anja, Carola, Stefano and Aileen, is the central point of contact for your questions, suggestions and praise throughout your stay - from the first to the last day of your holiday. 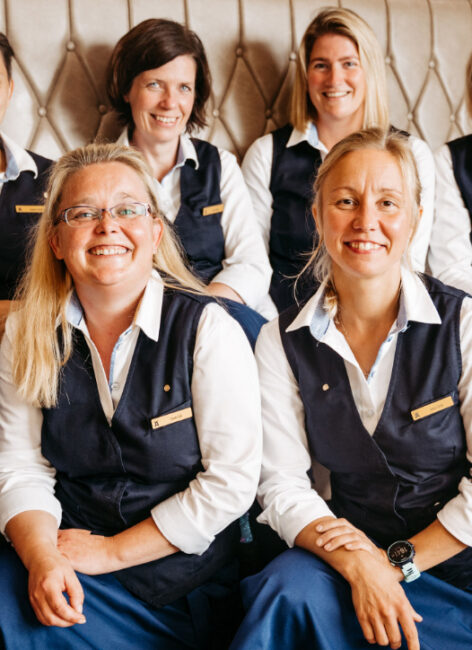 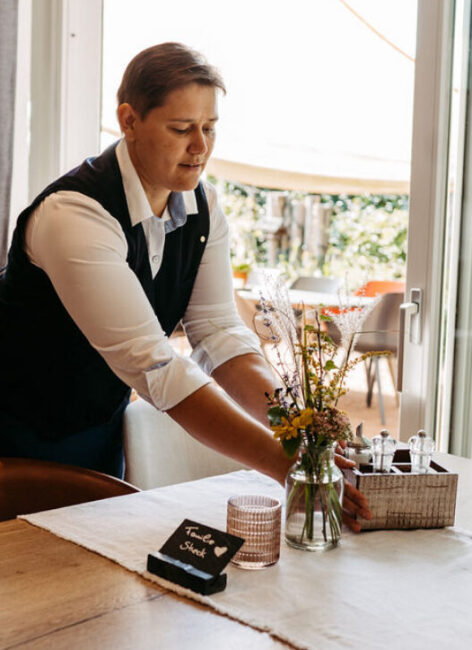 You can enjoy your meals in peace and quiet, as we look after you during mealtimes as well as before and after, so that you want for nothing in the way of culinary delights. We are happy to take care of your special meal requests, cater for food intolerances and are the helping hand at the buffet for your little ones. 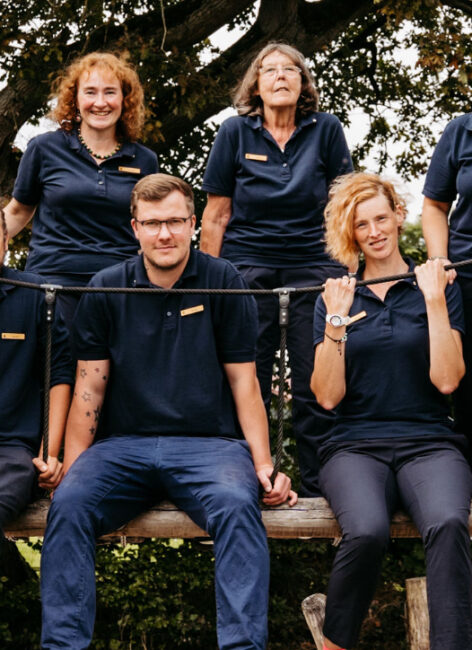 Children's eyes shining every day - our greatest motivation and joy is to explore the farm, the animals and the forest with your children. We always come up with a varied programme: we do handicrafts, play games, tend the vegetable garden, have a pool party and experience lots of adventures together. 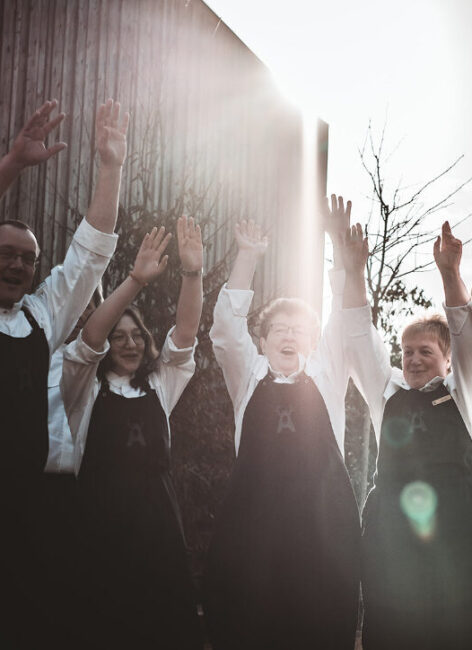 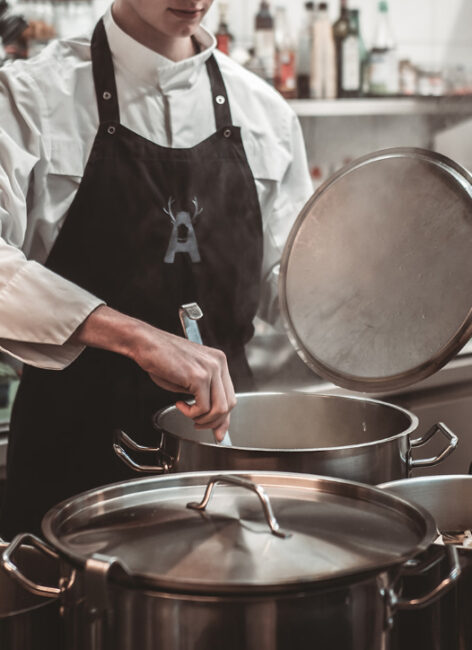 Healthy and fresh food for our guests is our first priority. That's why we stand for good, sustainable and varied cuisine. We are happy to fulfil special requests, cook fresh for the little ones and take food intolerances into account. We also cook vegan meals on request. 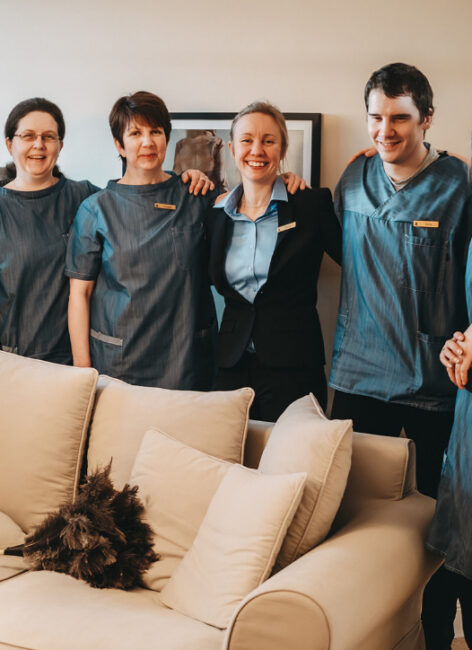 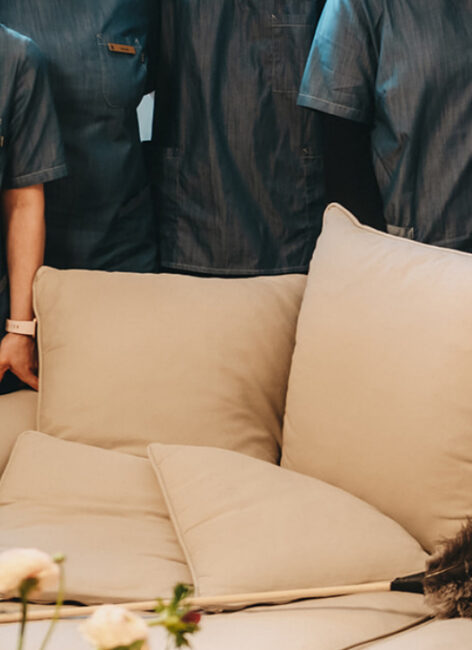 So that you can feel completely at home in our rooms and flats, we make everything fine, tidy and clean for you. We will be happy to provide you with everything you need for your family holiday in your room. This way you can arrive with little luggage and already have a relaxed arrival. 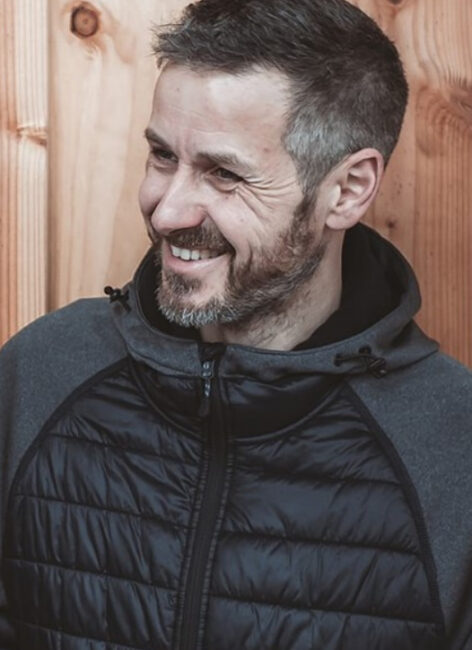 Popular with colleagues, not only because he can fix anything! If something is broken, a door is stuck or a kettcar no longer runs, our Ronny is there to fix everything. The little craftsmen of tomorrow are welcome to look over his shoulder. 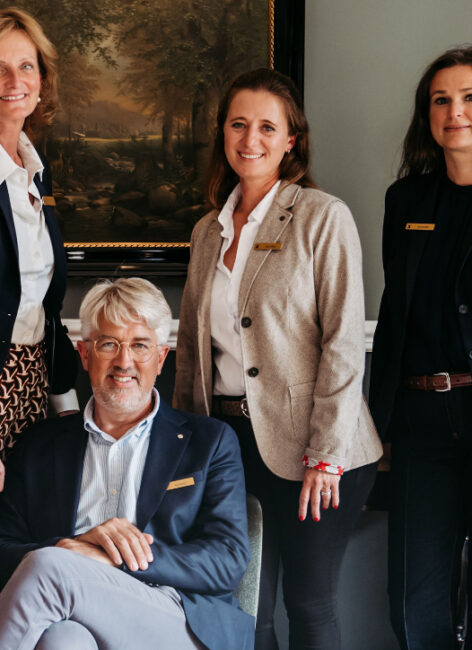 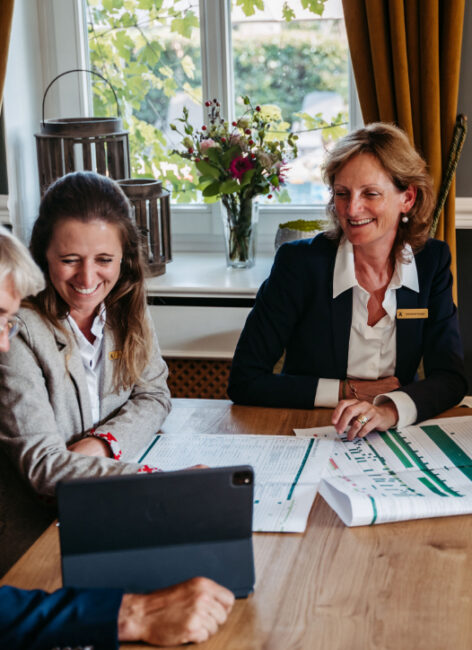 Frauke, Anja and Ross ensure smooth in-house processes, always keeping an eye on the big picture and an open ear for our team and our guests.

Whether it's cooperations, newsletters, our website, social media or on-site presentation - our marketing team with Beate and Steffi always keeps the "Averbeck" brand in mind and awakens in you the desire for a relaxed family time without promising too much. 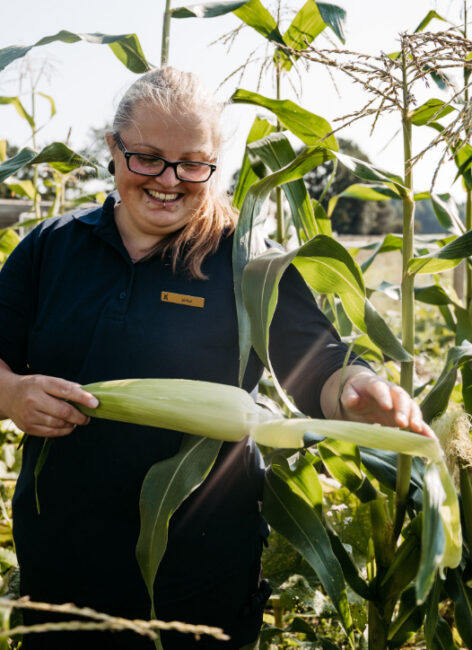 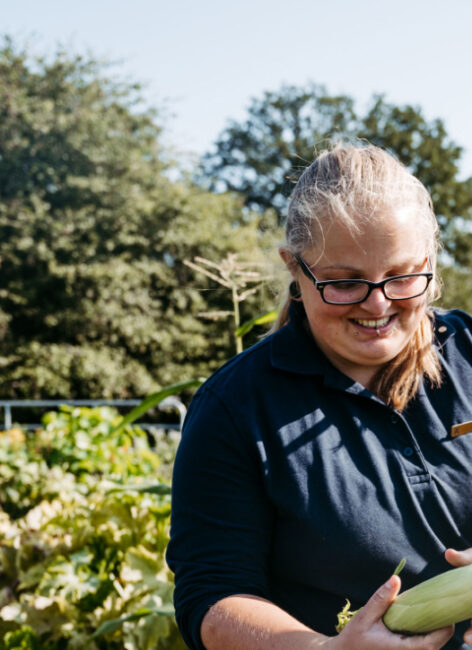 We grow fresh vegetables in our farm garden. With a lot of passion, our vegetable gardener Jule takes care that the little plants grow and flourish. Everything we harvest goes directly into the kitchen and is freshly prepared by our kitchen team for the family buffet.

The Landhaus Averbeck - since 1357

Like a grande dame of the hotel business, our farm has its very own story to tell. Family-owned for generations.

Landhaus Averbeck was first mentioned in a document in 1357 as Hofstelle Hassel No. 3. The farm has been in the family since the beginning of the 16th century and has been passed down from generation to generation ever since. The name "Garnhof" (Goarnhoff), which is still used today by old residents, is based on the former family name "Gade", which became "Hornbostel" through marriage in the 17th century and only became "Averbeck" in 1933. It was Gustav Averbeck, Hans-Heinrich's father, who married Gertrud Hornbostel at that time. Today, the entire farm, including all fields, meadows and forests, covers 189 hectares. Over the course of time, the management of the farm has always been adapted to the most diverse conditions and circumstances. On the typical heath farm with, on the one hand, sandy and low-yielding soils and, on the other hand, a lowland moor around the Örze valley, people used to grow frugal plants such as buckwheat and bog oats; they kept dairy cattle, pigs, heath sheep and goats. The heath areas were created by the large-scale clearing of forests for salt production. Wood was so valuable that peat from the moor was still "baked" here until about 1940 and used for heating in winter. Heidplacken, which was laboriously cut and brought to the stables as litter (hence "Packerei"), was the only fertiliser for the fields, together with animal dung. Other economic "mainstays" were the fish ponds for carp breeding in the humid Örze valley and, from about 1850 until the 1920s, the brickworks. The fired bricks were transported from the "Lehmkuhle" to the B3 on trolleys, but they were also used to build the barn, the bakehouse (ca. 1850, today's Landlümmels restaurant and play barn) and the main house (1909). In the bakehouse or "Häuslingshaus" there were rooms for the average five to six farmhands, maids and other employees of the farm, in addition to a large baking oven; one room in it was temporarily available to wandering homeless people, as was customary and prescribed at the time. The invention of artificial fertiliser at the beginning of the 20th century was of great importance: higher-yielding fields and meadows meant more food for animals and thus the possibility of keeping more animals. The hardship during the world wars and afterwards required the cultivation of "satiators" such as potatoes, bread grain, fodder and turnips or pumpkins and other useful crops such as flax (linseed for linseed oil) and hemp (hemp fibre). 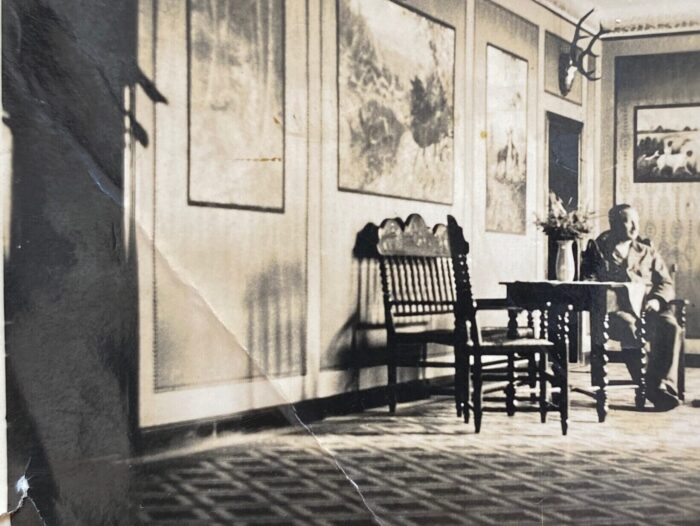 At the end of the Second World War, Hans-Heinrich was eleven years old and had two younger siblings. As the eldest son, he was destined to take over the farm one day. Gustav was still at the front at the time. Four refugee families (22 persons) from the East or bombed-out cities like Hamburg or Bochum found accommodation. At that time, they lived in the main house in what are now rooms 1 to 6. There were no sanitary facilities in the house - there was an "outhouse" in the courtyard and people washed themselves with buckets of water in their rooms. The Averbeck family provided the refugees with land to grow their own food. Some of the families found work in Hassel and the surrounding area and still live here today. In 1954, they decided to specialise and convert the farm as a dairy farm. The old four-storey house was demolished and a year later a "modern" cowshed was built in its place; maize and fodder beet were therefore grown in the fields as fodder for the cows. In 1960 Hans-Heinrich and Maria married and had three children: Christiane, Silke and Frauke as the youngest daughter. In 1967, Gustav signed the farm over to his son. After graduating from high school, the sisters initially left the farm. Lacking a successor and with the prospect of only being able to work economically if the number of cows was significantly increased, Maria and Hans-Heinrich decided in the 1980s to discontinue the dairy farm. Instead, the farm became one of the first to specialise in asparagus cultivation in the surrounding region. The foundation stone for today's holiday farm was also laid at this time: Maria and Hans-Heinrich offered some of the "vacated" rooms for rent. The guests, mostly Swedes passing through on their way south or Berliners for whom the Lüneburg Heath was the local recreation area, were served a homemade breakfast by Maria. More and more rooms in the main house were retrofitted and rented out. However, there was still no central heating in the house. The existing bathrooms were initially shared with the guests, and only later were new ones installed for each room. 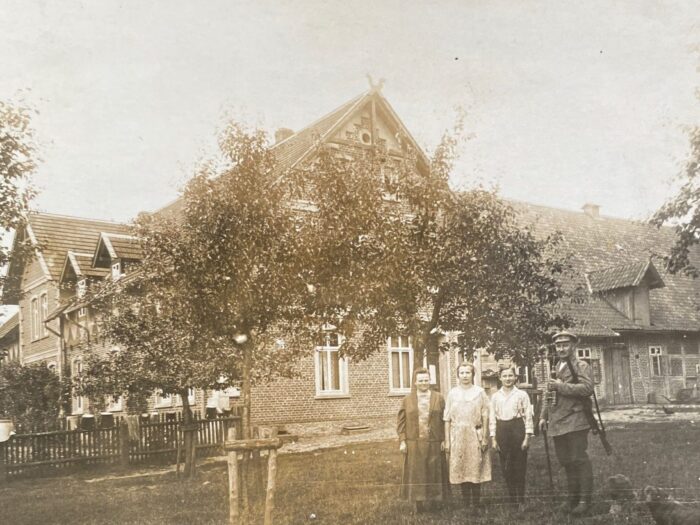 From farm to hotel

Italy, Berlin, London - and finally Hassel: Frauke and Ross can draw on a wealth of experience gained in renowned hotels in Europe. After the two met in Berlin and then lived in England for some time, they decided together to go to Hassel. The idea was born to turn their parents' farm into a family hotel surrounded by beautiful nature. Frauke first worked at the Hotel Fürstenhof in Celle as a receptionist. Hans-Heinrich and Ross set about gradually converting the empty cowshed: Where feed for the cows used to be stored in the hayloft, rooms 9 to 14 are now located.

In 1995 Jacob was "on the road", Ross took over Frauke's job in Celle. Along the way, they ran the farm together with Hans-Heinrich and Maria and expanded the asparagus cultivation to 3 hectares. The asparagus harvesters lived on the farm, partly in the hunting lodge, and were fed by the family. In 1997 Charlotte was born, and one year later Frauke and Ross officially took over the farm. Antonia was born in 2002. In 2005 they gave up growing asparagus, which was becoming less and less profitable due to the increasing oversupply. At the end of the same year, Frauke and Ross opened the "Landlümmels" play barn at Landhaus Averbeck in Bergen instead, which quickly became a popular destination for many families with young children in the region and, of course, also offered real added value for overnight guests. 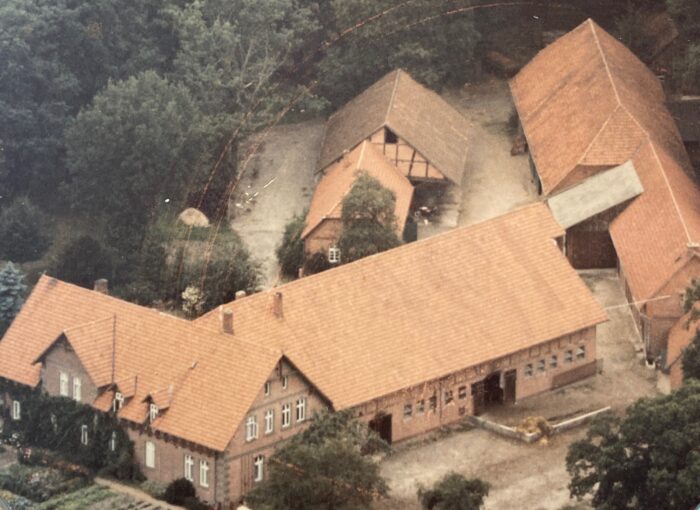 The foundation stone for family holidays

In 2010, thoughts turned to the further development of the farm. In order to continue the farm in a future-oriented way, however, the number of rooms on offer had to be increased significantly. Frauke and Ross worked out a family concept that included a redesign of the house, a flat house, child care and a hotel with a swimming pool. At the same time, Familotel offered itself as a strong marketing partner. This is how the Familotel Landhaus Averbeck in the Lüneburg Heath came into being. From that point on, everything happened very quickly: the pigsty became flats, the old horse and cow stable became a swimming pool and sauna, and the old children's rooms were converted into childcare facilities. New stables for animals, the winter garden, the new kitchen, cold storage rooms and the flat house were built. The ideal conditions for family holidays on the farm including child care were created. From mid-2011, the "Familotel Landhaus Averbeck" was bookable online. By the end of the renovation work in July 2012, additional staff had already been hired and guests were also being welcomed. In the course of time, the weekly hours at the hotel with childcare were expanded to 56. Thus, the Familotel crowns were increased from 3 to 4.5. In 2014, Landhaus Averbeck won the award as "Holiday Check Top Hotel", was awarded "Ok for Kids" by TÜV Nord and received the certification for "Service Quality Germany Level II". At the end of 2016, the appearance was changed with a new logo and corporate design as well as a new website. In 2018, we expanded and renovated our restaurant and built the popular cabins. 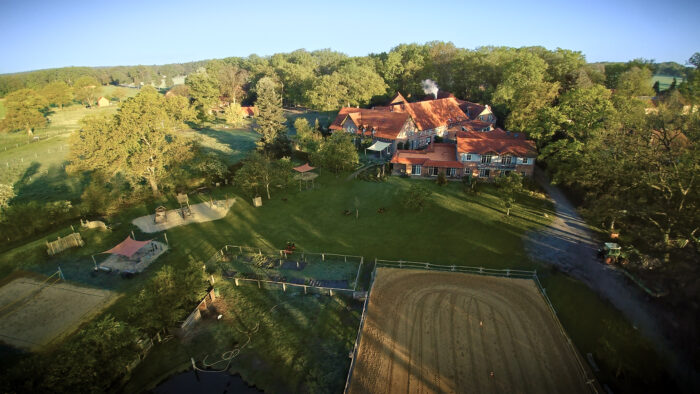 To make family holidays in Germany even more attractive for our guests, we opened our heated outdoor pool at the farm garden in summer 2021. Also this year we started our own vegetable garden "Farming at Averbeck" and already doubled this area in the following year. As in the years before, a different colour picture was given due to the pandemic. Since 2015, we have been able to accept this honourable award every year. In 2022 we have implemented a refresh of our corporate design and still have a lot of plans - be curious what awaits you at Averbeck this year and next... 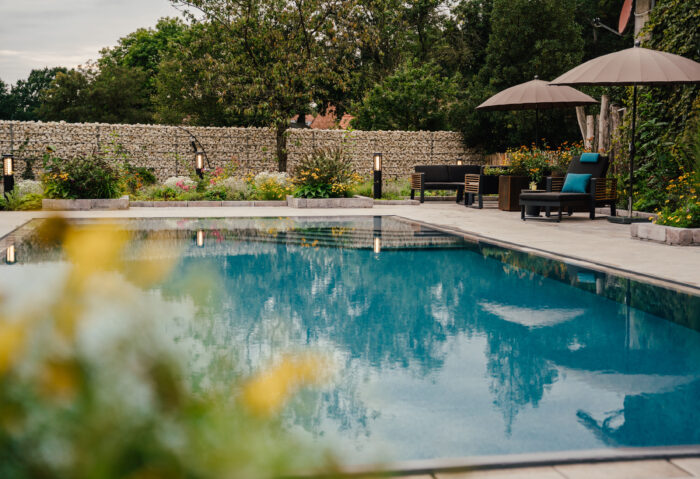